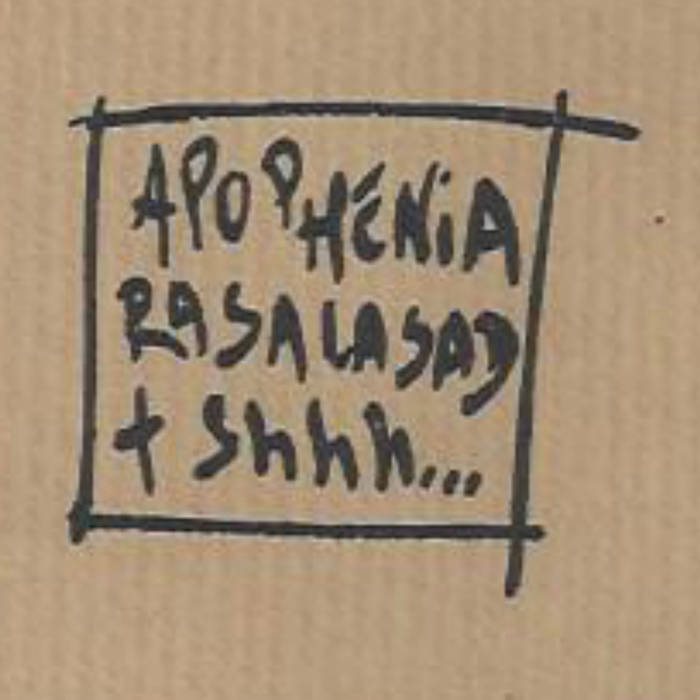 Apophenia is collaborative cd ep between Rasalasad and Shhh.

The cd ep comes wrapped in a cardboard box and inside a plastic bag.

THISOBEY is an ongoing series of Cd ep or k7 featuring collaborations between in-house artists with other invited musicians for special projects.

Shhh... :
In 2003 the musical project shhh... was born, and until now has released four albums and several participations in compilations and split's, having more than two dozen phonographic editions.

With releases on CD, DVD, vinyl, tape, floppy disk and on-line download and streamning, on labels such as This.co, Enoughrecords, Cold Model Records, Floppy Kick Records, Signal Void and Cobra Records, in such countries as Portugal, Canada, Spain, Hungary and Japan, having collaborated with artists as Sci-fi Industries, Dave Philips, Thisquietarmy, Rasal.Asad, Anla Courtis, Philippe Petit, Martin A. Smith, Zenial, Bolt, Fragment., Cris x, Francisco Lopez, Kenji Siratori and Carlos Zingaro. Rui bentes also has a side project "The Sleeper Has Awakened" with Helder Luis and as a complement to the music, he also creates most of the shhh... videos.

In addition to the music created as shhh... he also produces, under his own name, compositions for theater, exhibitions, dance and audiovisual instalations for names such as Teatro O Bando, Útero, A Gaveta, Adriana Queiroz, Salgadeiras Gallery, The Brooks Museum of Art, Fábrica da Pólvora etc., having done more than four dozen sound works for theater, dance, performance, exhibitions and installations.
www.shhh-music.net